(photos by Daddy-O)
23 months (in two days)- how is it that there are only a few more weeks before this sweet boy turns two? Every day there are tears and laughter, discoveries and set backs. Everyday we fall more and more in love with this little blue eyed boy.

The blue hat is a favorite and often stays on his head even as he falls asleep for nap or bed time. He reminds me of Hunter S. Thompson with it on and that makes me giggle.

Lots of talking, chatting and singing happening still. Lots of color identification (favorite color possibly yellow or blue?), counting to 6 (why six, I don’t know), identifying letters (not the actual letters, just the fact that they are “abcd’s”).
Just this week climbing and scaling all sorts of things has become a total obsession. I found him on the patio table on Monday night, just hanging out sitting there. Last night as I cleaned and organized the pantry, he squeezed his way past me and started to climb the shelving unit as if it were playground equipment. The library stool that we have for washing hands in the bathroom often gets drug out for all sorts of reasons, including pulling it up to the counter as we prep food, pulling it up to the fish tank area to get a better look and lately to pull it into the pantry to get things that are “up high” an “hebby” down, especailly those little treats for Cloe-girl, oye.

We are both feeling a little ick this week. Either it’s allergies (rabbit brush or the smoke from the wild fires around the area) or a little summer cold, but our noses are runny and full of ‘applesauce’. I keep thinking, I started this second pregnancy with a cold and I am going to end it with one. I hope it fades soon…

Daycare (3 days a week) has been going well.  Though some days its more like peeling Velcro off my leg then simply a drop and go.  He has a great set of teachers and ‘friends’ at school. Most of the kids he has been with since he started and I love that. He is still spending two days a week at my mom’s (JoJo) and loves Wednesdays the most because she totally humors him by puttin him in the stroller and following the garbage trucks around the neighborhood- that JoJo, she is a keeper.

There has been some serious “Monkey-see-Monkey-do” going on these days- If Daddy is doing it, he wants in on the action- It makes us laugh and also makes us really aware of our actions and words. So far no slips other than “Crap” when I dropped an entire carton of eggs on the carpet the other day.

He is still loving to sit and read, though not as much as he was a few months ago (we could pass hours by reading books, hours). His favorite book these days is an old Golden Book that I found at a yard sale, illustrated by Richard Scary called “Cars and Trucks”. He also loves to get all the tracks to the wooden train set out and set up elaborate railways and send the trains ‘Round the corner” and ‘Thru the tunnel”.

Cloe-dog is his constant companion around the house. Mostly because he likes to feed her treats all day long. She is so good with him (better than we EVER imagined) and allows for eye poking and tail grabbing, as well as a good body slam every now and then. I worry her little schnauzer body isn’t going to make it, but she gives him a warning growl and soft bite to when he gets a little too rowdy (Something I wish I could do when he decides that head-butting my belly is the most hysterical thing in the world).
Potty training is slowly in the works. I have been letting him run around diaper-less in the back yard this summer and he is often surprised when the stream of pee comes shooting out- looking down and then up at one of us in total surprise. He has gone #2 in the potty a few times, though usually upon my request and not his- he likes to tell me, “just farting”, when I know he is working on something… If when I do set him on the potty, something happens, big hi-fives and knuckle bumps. Changing his diaper has become a total battle, but I can get him to let me do it by telling him we can put the poo in the toilet and flush it down. I don’t want to force anything as far as the potty learning goes, but it sure wold be great to not be changing both him and Deuce!
I often get belly pats from my little man these days. One of the funniest things he says about my expanding baby belly, is when it peaks out from under my shirt (often), “Mama, close it”. Or if he wants to see my silly looking belly button he pulls up my shirt and says “Open it Mama”. He will pat it with love and say, “Baby in der” or “Hi, Baby” or “Baby come out soon”. I am a little nervous about what will go down once the baby does come, but I also think he is going to be a good big bro to who ever this little one is.
We aren’t sure how we will celebrate the big “TWO” since Deuce-baby’s due date is only 2 days prior to O’s big day, it is a tricky one on the planning front. I am hoping to get some “happy cakes” made and frozen in the next week or two so we can just grab and frost them on his special day and maybe have a few family members/close friends over to sing happy birthday to him. I would hate to not celebrate at all. Maybe Deuce will show up early and then I won’t have to worry, wink. 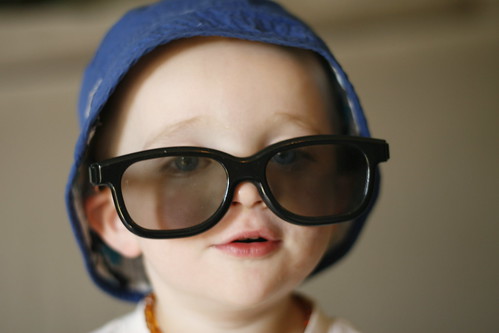 We love you little boy blue.
xoxo mama and daddy-o