These two, they have history that goes back further than they even know. It goes back 32 years plus a few if you count their grandma’s time laughing and living before their mamas were born. 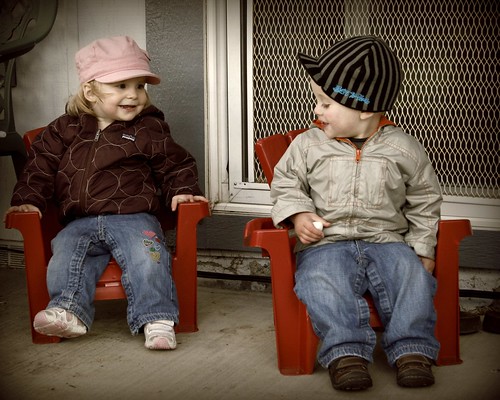 You see, that little girl is my best friend’s baby (er, toddler). My best friend and I have known each other since we were born and I remember telling a checker at the local Safeway, “I have a twin sister, only she has a different mommy and daddy then I do, and she has brown eyes not blue and she is lots taller than me.” Yep, that little girl’s mama and I are know as the giggle twins and we go waaaay back.

Over the weekend we were at their house for dinner and beer bottling (the daddies home brew). The kids were being so cute and it was the first time we really watched them interact and play together, talking and babbling in their own little worlds and language. Giving kisses and bouncing balls off each others noggins. Yep, these two have some history, and I have a feeling they will make some of their own as well.