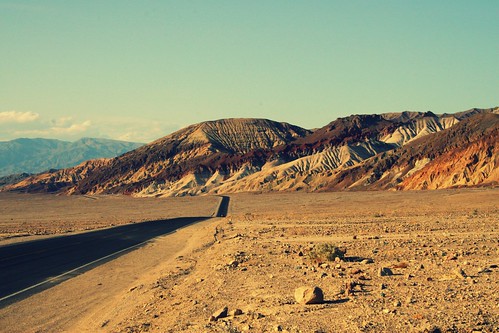 Last week we took off a half day on Wednesday, all day Thursday and Friday from work and enjoyed a very nice, extended weekend with my husband’s sister and her family. We headed south of Reno down to Death Valley National Park for a family camp out. Camping with two 18month old boys and one 3.5 year old girl is certainly different then going at it with just adults, but I wouldn’t trade the stories or the laughter that our three little monkeys brought along for anything in the world.
We got into camp late (around 9 or 9:30) on Wednesday evening and set up camp in the dark and pretty much crashed out in our tents without so much as a wimper. On Thursday we woke up to an amazing blue sky and warm sun. We ate breakfast and had our coffee/milk. 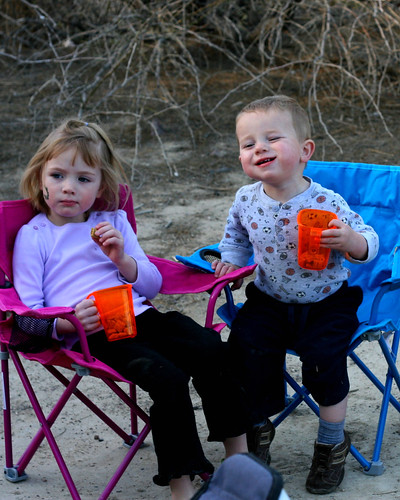 We lathered up the kids and ourselves with sun screen and then took a little walk to a big open area just behind the campground limits. The site we stayed at was right next to the Airport road, that is flanked between the green-green of the Furnice Creek Golf Course and the Furnice Creek Camp Ground.

We found a big open area off the road (the service vehicles BLAST by on this road so keeping the kids off of it for safety reasons was a really good idea) The adults all took turns getting light headed while blowing up these super long balloons that, when let loose, whistle and whine, up up up and then rocket there way back to the hard pan desert floor. 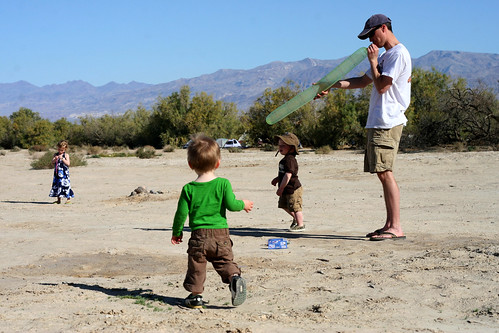 This kept everyone totally occupied and entertained for about half an hour/forty minutes. At which point we all decided that we were getting hot- we had heard that the pool at the Furnace Creek Resort was open to campers for a small fee. We also needed to check in to the campsite and get our park pass for the cars. With each of the kids in a hiking pack we headed over to the visitor’s center for more info and check in then we got our shower pass and headed to the pool.
I was a little worried that O wouldn’t have any fun in the water. Last summer he would scream bloody murder at just his big toe touching the surface of anything but the bathwater and so we were pleasantly surprised that he not only got in, but that he was incredibly happy while in the pool, as well as incredibly difficult to get back out of the water! 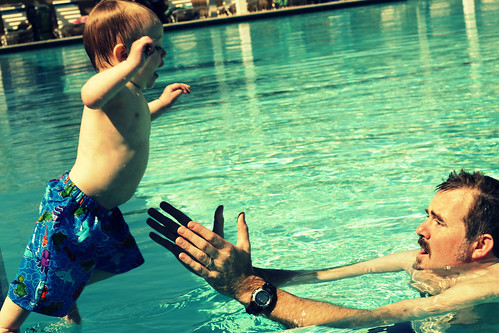 I think seeing the two other kids going for it made it okay for him. Peer pressure can be a bitch, but it can also be a total blessing! He floated and splashed and jumped off the side of the pool over and over again. I think we need to get this kid into swimming lessons asap! 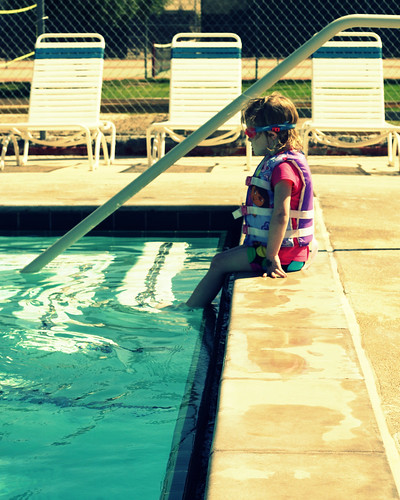 On a side note, the older boys (aka the dads) kept the sun bathers entertained while they played, “who can hold their breath longer” and other such games- I caught one older, leathery gentleman giggling at them at one point. 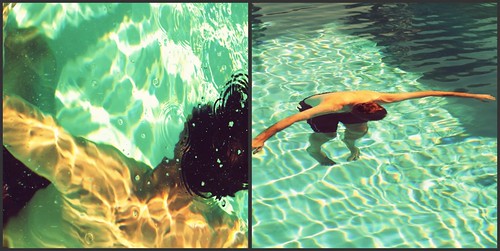 We all headed back to camp once evreyone had prune fingers and toes and of course on the walk home our little guy and the two other kids conked out in the packs and were put down for naps. 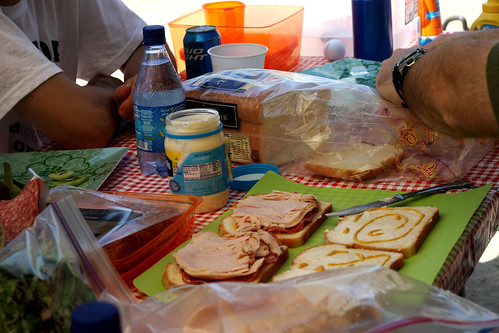 We made lunch and hung out, getting our shade structure put up and more substantial. It was hot, especially since we have been in winter mode up here in Reno and haven’t had any weather over 65 for the past few months.

This looks totally wonky, but there wasn’t much for us to tie it off to in order to keep it from being totally lopsided. It worked and we had a good amount of shade to hide under during the hottest part of the day. 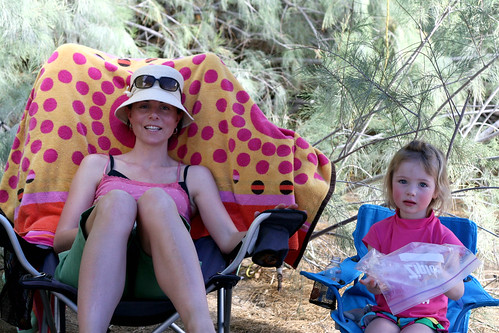 The kids got up there was more playing around camp-that is when I looked up and noticed that the mountains west of camp were looking a little grey. I was hoping that the weather was headed a different direction then for us….

(note, this is the road and set of hills as the photo above of the to little dudes in the morning!)
Not more than 10 minutes after snapping this picture did we get slammed with a crazy dust storm that lasted for well over 3 hours, the wind not dying down until well into Friday. Now I grew up on the edge of the Black Rock Desert, and for any of you who have attended the annual Burning Man Festival, you know that the playa can get crazy windy/dusty- but I always had a house to huddle up into when a good old wind storm whipped thru the area. Only having a tent and a giant tamarisk tree to wait it out under while a sand storms hits is just an entirely different experience. I don’t think I have every encountered anything quite so crazy.
I didn’t get my camera out for any of this because I was so scared it would get ruined but believe me, after the largest and dirtiest gusts we all looked like we had been coated in baby powder- where our hands had covered our face we had a mask out line left behind. It was pretty crazy. The kids all took it pretty well- I referred to the experience as “Death Valley spa treatment” first we bake you then we exfoliate you- it’s a good moto.

At some point during this chaos Grandma and Grandpa S. showed up (they had been a big RVing tour to SoCal and meet up with us in DV as their last stop on their loop back up to Reno). They offered to buy us dinner since the storm sort of coated camp in dirt, but we had brought so much food and were really worried that it would all spoil if we didn’t get to it. We were lucky enough to have a nice window of calm and got to work and had ourselves a fine fajita dinner, complete with margaritas and guacamole. yum.

A wild and fun start to our first camp trip of 2010. More stories (and pictures) to come…..