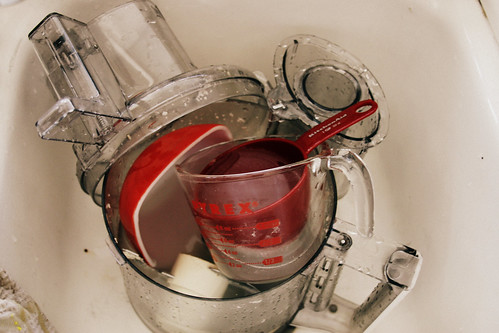 Last week on Flickr Krista of, This Inspired Life, posted pictures of calzones she had made for her family. (I might add that she always posts amazing recipes and I actually have a section in my cook book of yumminess just from her blog/flickr postings) I knew instantly that part of my weekend would be spent in the kitchen making my own batch. We had some left over cheese, pepperoni and sauce from pizza that I didn’t want to go to waste so it was meant to be. I dug out my trusty Vegetarian Planet cook book, found a pizza/calzone dough recipe and put my food processor to work. 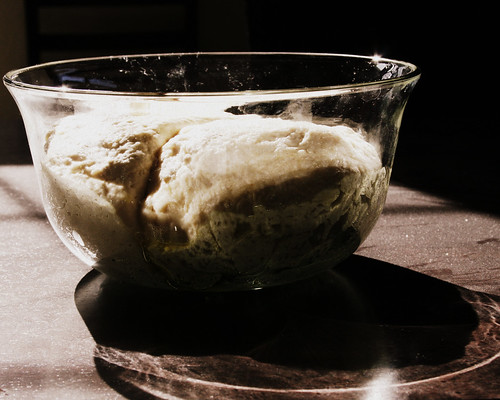 While the dough proofed, I grated cheese and zucchinis, chopped garlic and mushrooms and then sauteed them all up. After the veggies were done cooking I threw the pepperoni slices into the hot pan to cook off some of the grease. I knew all that grease could ruin the pockets and who wants all that extra ooze when they eat? 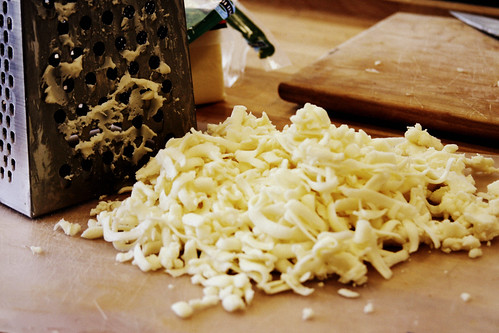 I took small balls of the proofed dough and rolled them out to about 6-8inch rounds, places a bit of sauce and what ever topping,er stuffing mixtures I pleased inside. I need to work/perfect on my fold over method but what these babies lacked in looks they made up in taste. 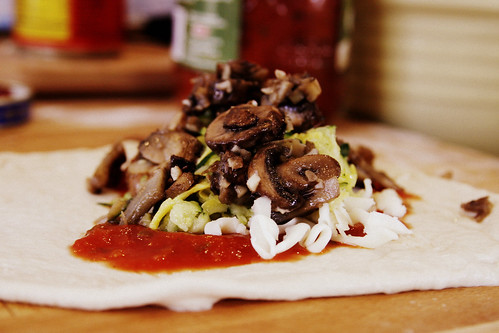 My initial idea was to make a big batch of these suckers and freeze a bunch for quick lunches and or dinners on the go. We still have a couple in the fridge, but they became second breakfast and lunch for our Saturday. Upon first bite Daddy-O determined these should be put in the regular recipe rotation. I love when that happens! 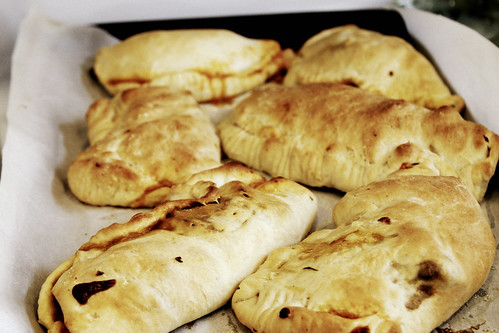 I would suggest putting down parchment paper on the baking sheet to help make for a quick and easy clean up also a good idea to sprinkle some cornmeal down too. The paper will catch the juices that sneak their way out of the dough and save you some scrubbing in the dish department later.

Here is the dough recipe I used- next time I might try using some whole wheat flour or maybe some flax for that extra healthy good. Once our garden gets going with herbs rosemary or even cilantro could be a fun addition. If you are doing a big batch for freezing or a crowd I would suggest doubling or even tripling this recipe.

proof the yeast as directed on the package, reserving the remaining water
add the flour, salt and oil to the food processor and once the yeast is ready add it and the remaining water to the moving food processor. Run until the mixture forms a ball, adding more water or flour as needed. Process for 15 seconds more.
Place the dough in a deep, oiled bowl and turn it to coate it with the oil. Let dough rise, covered with plastic wrap, in a warm place for an hour or until double in bulk.

On nice thing about this dough is that if you you aren’t going to use all the dough you can freeze it for later use or to just have on hand for a when you don’t have the time to make the dough but want pizza/calazones.

Use your imagination with the fillings- and let me know how it goes!