Made the cake for the second time yesterday. Again, it was a total hit with everyone at dinner. 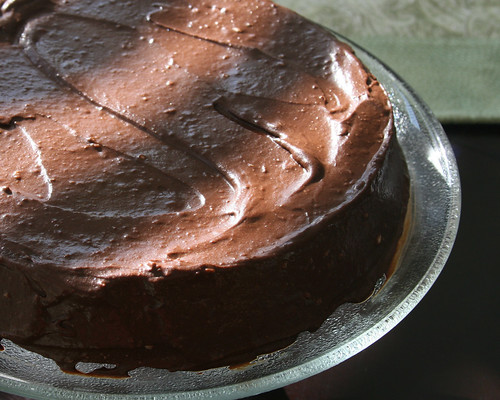 Thanks to the Big and Little “test kitchen” for the fantastic recipe. Krista tops hers with powdered sugar, but I took it to the ridonculous next level and whipped up some chocolate frosting… oh man.

I also snuck some time in at the sewing machine and made this . The tutorial was easy to follow and The trickiest part was probably getting the casing sewn around the boning once it was in (I purchased a different kind of boning then used in the tutorial so it was my own doing there).
It took me maybe an hour and a half or less. I can’t believe they get $35-45 a pop for these at the stores! I don’t really mind nursing in public, but I feel like it makes everyone else uncomfortable when I pull out one of the girls, so this is a good way around that. The cover will come in handy next weekend while we are out and about over the 3 day weekend. (It’s Nevada Day, not just Halloween ya know and we get the day off because of it. Be glad this isn’t a video blog because this is where I would be tempted to sing you the state song,we take our statehood serious around here gang.)

In other news…
Mr. Man slept 7 hours straight last night. S.E.V.E.N.
It was like a mini vacation I tell you, a day at the spa or something. I had to go in at 4 to make sure he was still breathing. He was of course, not just breathing but snoring away in his little way that melts my heart. I let him keep sleeping, although he did wake up about half an hour later, famished and wet.

It has been a nice weekend and I am looking forward to the short week (read, hubby will be home for more that two days in a row and we get to hang out with him- Fridays are still exciting when you aren’t working!)

I hope you all are enjoying or have enjoyed your lovely fall weekend, I sure have.