What a nice Christmas weekend. I was let out of work half day on Thursday and was able to go home and hang out with the kids and my man for the afternoon. Always a treat. 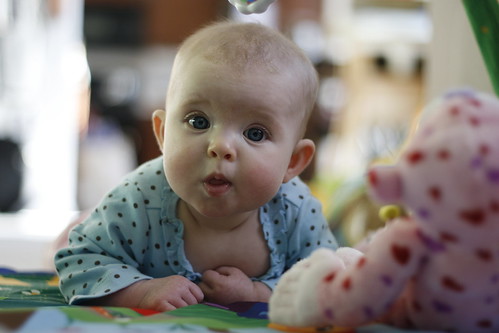 O and I made cinnamon-applesauce glittered ornaments after he woke up from his nap.
He loves glitter, loves. 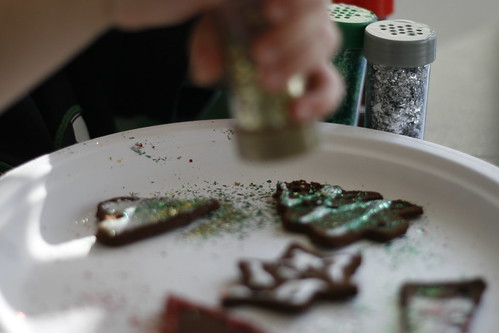 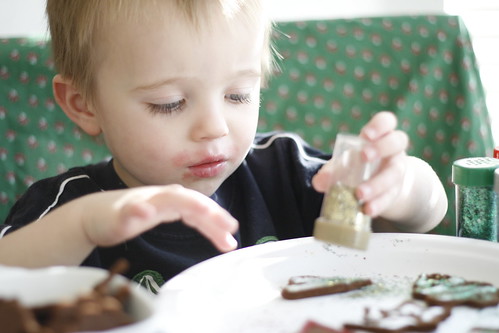 Christmas Eve was spent wrapping presents and getting the house straightened up and cleaned. Not the most exciting thing, but it did feel good to have the place organized again. How the heck does the house get so crazy?! 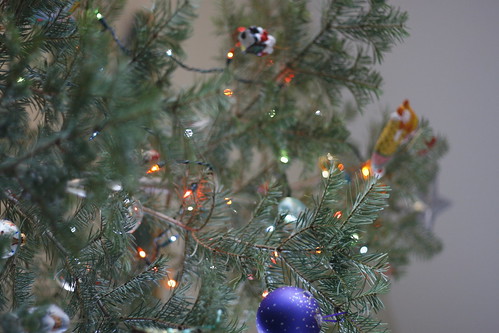 My mom came over around 4:30to get O and I so we could go to church. O was a good boy, but a typical 2 year old during the service. He kept asking(in a not so indoor voice), “when will the horns play?” as he pointed at the pipe organ pipes up on stage. When one of the kids got up to play the flute he told me, “Like Farkle McBride!”He went up for the children’s portion of the night and got a candy cane…. “CRUNCHY” he announced more than once as he quickly devoured the cane and became a red sticky mess of holiday infused slobber. I was slimmed as I lugged him out to the bathroom to rinse off. Good stuff. At the end of the service we all got our candles and he insisted on holding one, lit of course. 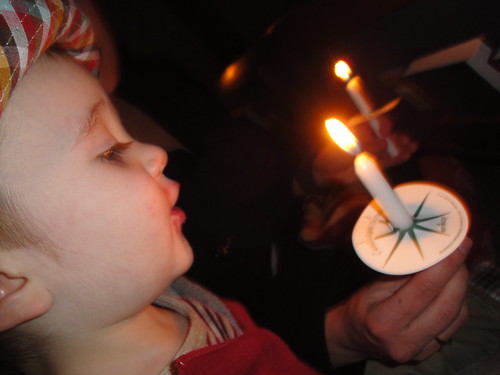 photo by jojo
It was a really nice service and we even bumped into my sister in law and her family as we walked outside singing Silent Night at the end.  On the way home we picked up our take out Chinese food (which always reminds of the ending to A Christmas Story) and headed home to eat. I am not sure where this tradition started, but I like it. Apparently, we aren’t alone because the restaurant was super busy.
Before bed time we made sure to sprinkle the “reindeer food” on the grass out front (died macaroni with LOTS of glitter in a zippy bag from school). And then set out the cookies for Santa. We read, The Night Before Christmas, Rudolph The Rednose Reindeer and The Grinch That Stole Christmas and sent our little boy to bed… 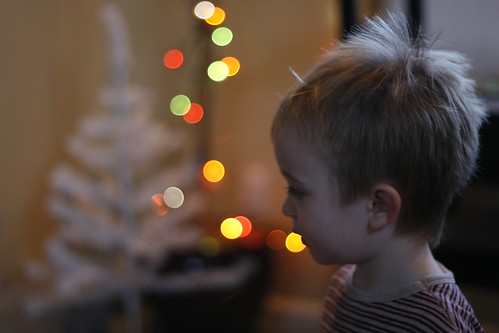 Christmas morning came and we slowly made our way downstairs. I put cinnamon rolls in the oven and coffee in our cups. O asked the question I thought he would, “When’s Santa coming over?” I had a feeling he was thinking that Santa was going to come and hang out with us all day- I had to explain that he was off to gift other kids their presents and was probably home with Mrs. Claus by now. He was a little disapointed, but got over it pretty quickly. 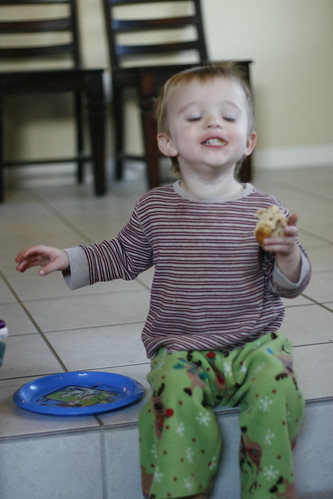 Then the opening began. It was a hoot to watch O rip, ever so carefully, tiny pieces of wrapping off his gifts. It took him forever to get into just one present. 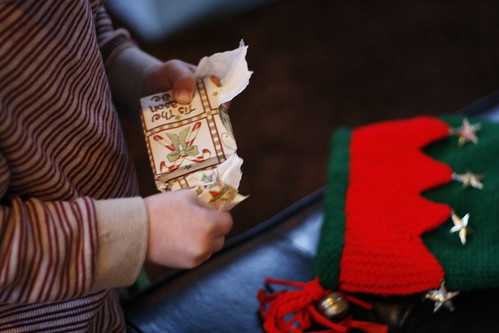 He loved that things just kept coming from the stocking and we had to stop at one point to fuel up with a bit of cinnamon roll and play with a gift he really liked, the tool kit Santa had brought. 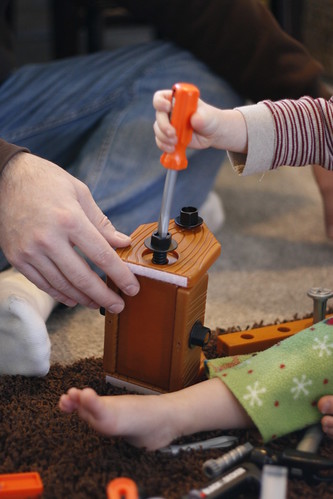 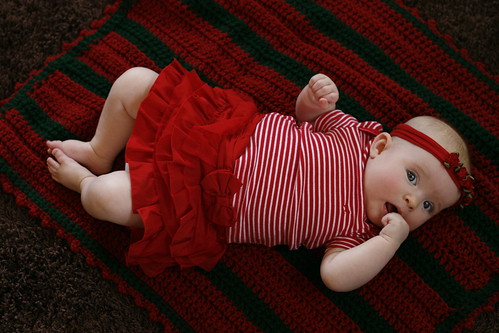 She was my favorite present under the tree. 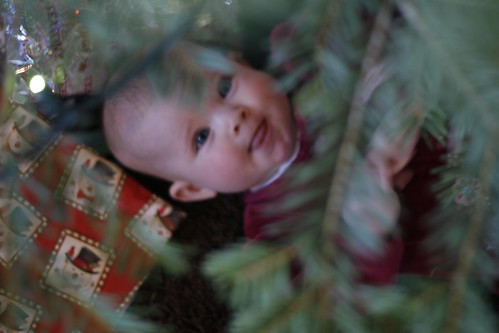 Even Cloverdale Pesto got a few new toys from Santa. 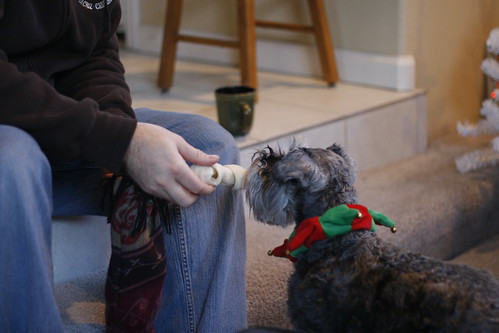 My mom came over around 11 and we started to prep the food, lasagna and a turkey. 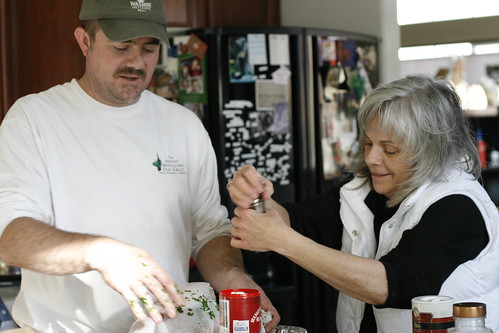 We put our oven to work on Saturday- both top and bottom ovens going and all the burners cooking something or another. 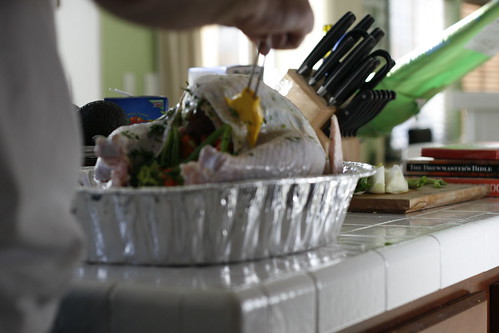 Our friends started to show up around 4. My best friend , her husband and their girl showed up with yummy artichoke and spinach dip and some awesome homemade sangria!
L and O played and played it was really sweet. 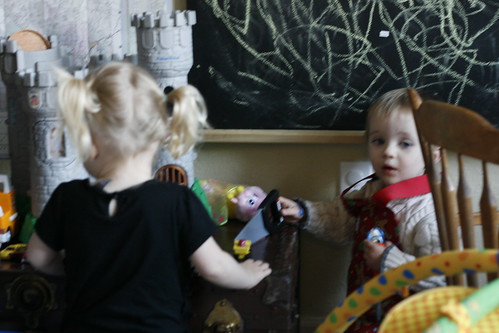 Our other friends arrived around 5ish with their twin boys. Once they warmed up with everything going on, the play room was crowded with toys and kids. It was wonderful.
I some how didn’t get any photos of the whole group- but trust me, it was a great crew and we had a great dinner. At one particular silly point Daddy-O even got me with the Proseco when he popped the cork for pre-dinner enjoyment.
Sunday was spent doing pretty much nothing. My extended “Truckee” family came by around noon and we fed them left overs- I am pretty sure the lasagna is multiplying in my fridge- even after everyone had some, there is still more than half a pan full of the stuff!
O did something he has never done before shortly after company had arrived- he told me he was tired and wanted a nap- I put him to bed thinking he would get up in a few minutes, but to all of our surprise he was out for a good 2.5 hours! Fifi got passed around to each of the family members and was full of smiles. But she soon got sleepy too and went down for about an hour and a half.
After our company left we just hung out and lazed around the house, snacking here and there and just enjoying the day off. It was perfect. 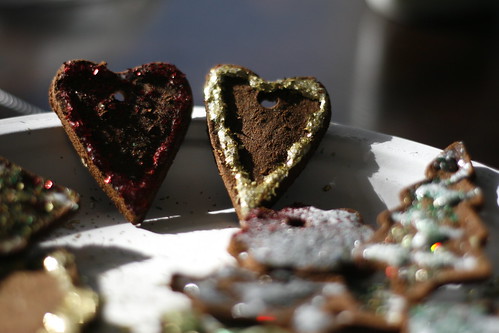 I hope everyone had a lovely holiday! I hear 2011 knocking on the door…