In other non-vacation news, we are growing this baby and I haven’t really chatted too much about it yet out here. 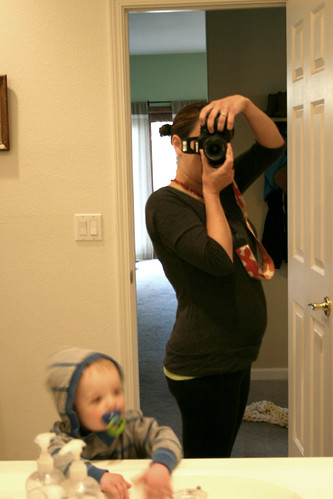 I am about 18 weeks along right now (this photo is 17wks). I took a test on December 22nd and saw a very faint + sign. I shook it off to wishful thinking. On the 23rd we were at the grocery store and I grabbed a box of tests that actually read out “pregnant” or “not pregnant”, enough of this guessing if the + was there or not! I took a second test on Christmas Eve and it came back, “pregnant”!!! I was so excited but decided to hold the little secret in for the day. I could wait 24hrs to tell hubby and so I wrapped up the test stick in festive paper and stuck it in his stocking. What better surprise then to find out you are gonna be a Daddy again?
Let’s just say that Daddy-O did not cooperate in my plans for Christmas morning. He slept in and then was lolly gagging around, taking a leisurely shower and making coffee before he wanted to get to the present opening. It was making me crazy, plus that little word only stays visible on the test stick for 24hrs, the clock was ticking. I finally just brought up the wrapped present and gave it to him – It took a minute or two to process (Daddy-O doesn’t do mornings) and then he just kept saying, “really”? We waited and tried a long time to get pregnant with MrO and so for this to happen on only our first real try was sort of unbelievable!!
We were glowing with our secret for the next month or two. Oh sure, there were signs and I think family and close friends were keen to what was going down- I had the stomach flu several times between Christmas and MLK Day, but each time another family member or friend that I had been around would catch the same ick and would soon be hugging the bowl just as I had the week before. So I was able to pawn it off as a nasty flu bug that wouldn’t shake.

In January I came down with another bought of the stomach flu and a major head cold turned sinus infection that knocked me on my butt for more than a week. I lost nearly 10lbs, was weak and super duper tired. It was really hard and I started to question why I wanted to be pregnant while chasing around an 18month old! Of course I knew exactly why and now that I am well into the second trimester, I am feeling much better and have a ton of energy back in my day. I still love me a good nap on the weekends if I can manage (I snuck in a 3 hours snore fest last Saturday) and can sometimes still feel a little funky early in the mornings, but for the most part I am doing really good.

The bump is growing and “Deuce-baby” is wiggling around in there and hic-um-upping away on a regular basis these days. I got to hear the heart beat at my doctor visit Monday and it brought me to tears (again). It is such an honor to be growing a new life. We will have our anatomy scan on the 19th of April; I can hardly wait to get a little peak at this baby. Like the last time around, we aren’t going to find out the sex of the baby, we will wait until the grand entrance, which will be sometime in late August early September.

For those of you following along, you might be thinking, “hey, isn’t MrO’s birthday in early Sept.”? Your thinking would be right. The baby’s due date is only two days before O’s 2nd birthday. I am not quite sure what this means for his celebration but we will figure something out to make sure his second year is honored properly.

I switched doctor/practices for this go around and am pretty happy with the change so far. My new doctor has listened to me when I talked to her about my longer than ‘typical’ cycles and when the baby measured a little smaller than the 9wks at the first ultra sound. She asked me if a week off would make sense with my “records” and it did. You see, we use a charting method for birth control/baby makin’ and in my charting history I have found that I don’t ovulate until a week later in my cycle than what is dubbed as ‘average’. Most women ovulate around the 14 day of their cycle; I am more like a 21 day mark kind of girl, this is ‘regular’ for me.

(This could be TMI, but it is also an amazing way to go. I feel so empowered to have this knowledge and was a little sad that no one had ever taught this method to me prior to finding the above linked book. If you have always wanted to get off the pill, learn more about your body’s own rhythm or if you are ready to start trying for a little cashew of your own this book may open your eyes to a whole new world- it’s is pretty amazing.)

At any rate, the doctor bumped my initial due date an entire week forward (something I really feel should have happened with O, but didn’t). This office also has a much more open idea about the 41 wk rule and is home to one of the only doctors in town willing to perform a V-BAC and another doctor who is loved by the local doula and midwife crowd for the freedom he allows his patients during the birthing process.

I am determined to get more belly shots in, chat a little bit more about this pregnancy and thoughts on being a mom of two. I hope you don’t mind! I will definitely be posting the ultra sound pictures from our upcoming appointment… stay tuned!